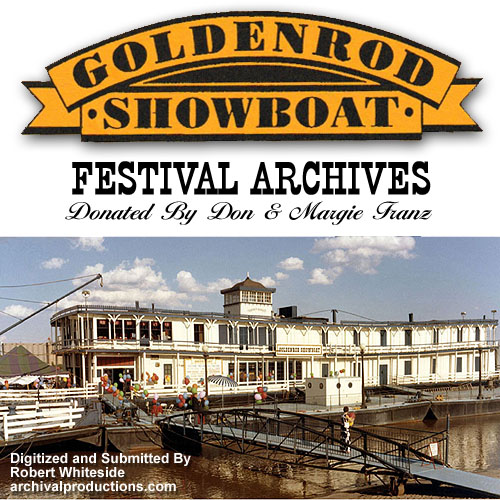 As John Auble, the television personality said in his Festival Introduction, "In The Big Inning." There was Captain French and his wife, the other Captain French. You can read about them, the Menkes and how a large wooden theatrical structure ended up at the base of the St. Louis Arch in the book, "Showboats" by Phillip Graham. It is not obvious to most people that a showboat isn't really a boat.. it's a theater on a barge. The showboats had to be pushed and pulled up and down the rivers by ...

Concert VHS recordings from the 1985-95 Ragtime Festivals on the Showboat in St. Louis. We've added documentary video about the history of the National Landmark and plans to rebuild it as a Museum and Theater somewhere in the St. Louis 3 rivers region. (The preservation efforts by the small group of volunteers was successful only in preserving some of the artifacts from the Showboat.  The structure was destroyed and the hull sold for scrap).   So, any requests for donations should be...
Topics: goldenrod, showboat, ragtime, festival, riverboat, preservation

DESCRIPTION
As John Auble, the television personality said in his Festival Introduction, "In The Big Inning." There was Captain French and his wife, the other Captain French. You can read about them, the Menkes and how a large wooden theatrical structure ended up at the base of the St. Louis Arch in the book, "Showboats" by Phillip Graham. It is not obvious to most people that a showboat isn't really a boat.. it's a theater on a barge. The showboats had to be pushed and pulled up and down the rivers by chaperons (tug boats or in earlier years, stern wheelers). The Goldenrod had many companion boats in her lifetime. She started out with a wooden hull, sank several times, got smashed by a barge, and had her hull replaced with a steel barge hull. The Goldenrod was designated a National Historic Landmark in 1968 and burned in 2017 when it was little more than a ghost ship.

The notion of presenting historic riverboat jazz on the Showboat sounds like an obvious idea but didn't really happen until musician and historian, Trebor Tichenor mentioned it to his band mate, Don Franz. At that time in (the 1960's) the St. Louis version of the French Quarter or Greenwich Village was an urban redevelopment called Gaslight Square.. which gave birth to the Traditional Jazz revivalist group, The St. Louis Ragtimers. Gaslight Square was partially destroyed by a tornado, then overtaken by the Rock music bands, so the Ragtimers' tuba player, Don Franz found a partner/promoter to help him purchase the Goldenrod from old Captain Menke and with community support they were able to restore the rundown dinner theatre as a venue for what became an internationally famous Traditional Jazz Festival. Some of this is covered in the brief documentary at the end of "Golden Memories," the movie length video I made to represent the Festival experience.

Don prefers to use the formal title, "The St. Louis Goldenrod Showboat Ragtime and Traditional Jazz Festival." Don wrote a history of the Ragtimers with additional background material for the group's 50th Anniversary performance. The article is available at www.stlragtimers.com.

It has been said that Jazz is the only uniquely American Art. Ragtime probably evolved from the Cakewalk, which Trebor Tichenor pointed out to me, was slaves mocking white plantation owners with rhythmic, high-kicking dances (as recorded in studio films by Thomas Edison). The melting pot of immigrants to New Orleans that included German horn bands, Cajun fiddle and Gospel piano players seasoned the jazz gumbo that flowed upstream to St. Louis. Race relations aside, the complicated and interwoven art of minstrel shows performed by both black and white performers became an integral part of performing Ragtime. No one can deny, nor should they, that most of America's musical legacy is inspired by African American Art while also tainted by racist stereotypes. So, all performers must be careful to put this history in context as the Ragtimers always did, with knowledge of the history, respect for the song composition and a feel for the theme.

St. Louis gets misplaced credit as the home of the Blues.. mostly because W.C. Handy, a very well schooled composer, wrote the first "Blues" song in full compositional transcription, "The St. Louis Blues." The Blues was conceived in Africa, carried in slave ships and born in the American South (not St. Louis). Conversely, St. Louis just doesn't get credit as the founding area of Rock n' Roll. Even though, the first known Rock song came out of East St. Louis. Rock was really born at George Edick's Club Imperial in St. Louis and on St. Charles "Rock" Road in North County St. Louis where Chuck Berry and Johnny Johnson re-worked boogie-woogie into the signature Rock music format. Similarly, the origins of Ragtime are woven into St. Louis. Once again the credit goes to the first African Americans who had the talent and knowledge to compose and transcribe the music. There were possibly predecessors with "barrel-house piano" who didn't transcribe their piano style. There wouldn't have been the original Ragtime craze if St. Louis music publisher, John Stark hadn't started selling these brilliant composers. Ragtime was an enormous success, partly because it was emerging at about the same time as the St. Louis World's Fair of 1904. So, again as the roots go straight back to the African American experience, the original works and the popularization took place in St. Louis.

The fascination for roots music by white middle-class Americans has made a lot of fortunes. The spin-off pop arts have generated mega-fortunes. Sadly, few of the African American creators ever benefitted from Jazz, Rock or Blues and were still being exploited into the 1960's and 1970's. The Goldenrod Festivals were more like white people finding the religion of Traditional Jazz. They idolized the African American founders and (like the Newport Folk Festival) invited the few remaining black founders to participate in the celebration of the music. Most of the videos from the years of the Festival (after home video became available) are white groups who have learned the music with devotion and a love of the bawdy, yet beautifully structured old music. The Festival was true to the Art as much as possible by presenting solo piano artists, classically trained who conveyed the complexity and sophistication of the music. A lot of the groups gravitated toward crowd-pleasing Dixieland, the noisier horn band style.. but for the Festival, kept the repertoire more historic.. referencing America's "Age of Jazz" in the Twenties and Thirties while covering at least some Ragtime and Riverboat Jazz.

Don Franz, as musician, promoter and co-manager of the Festivals, kept quite a lot of memorabilia, i.e. personal photos, programs and flyers, souvenir items and most importantly, these videos his boat crew recorded from the balcony position. As someone who knew the band since childhood, (my uncle J.C. Whiteside took photos and made tapes of the group) I never made it to the Festival. So, identifying the groups became a pretty tough job of discerning which white people in polyester polo shirts I was looking at. Seattle's Evergreen Classical Jazz Band made it easier one year by wearing green polo shirts. I'm very complimented that Don trusted me to archive his valued collection. This Online Archive is the culmination of a decade of work.

The video archive reflects repeat performances by Festival regulars like Chicago's Salty Dogs and New Orleans' professional performer, Banu Gibson. Carol Lee brought blues power to many songs with the Salty Dogs. St. Louis legend, Jean Kittrell obliterates the piano and belts out songs with Southern audacity. There's brilliant instrumental performances by British music legends like John Whitney, Kieth Smith and music hall vocals by Ian Whitcomb. The recordings from over a decade do have many repeat sets by the regular groups and artists. Aside from having different color matching shirts in different years the groups often have varied song lists. So, if you've seen only one set by a group, you probably missed a whole lot more from that group. The only year easily identifiable is 1990 because of the large tribute portrait of Jelly Roll Morton in the frame.

In later years Don had the house video recorder moved to stage left where we lose a lot of audio quality in the vocals but.. we gain a view that makes us feel like we are in the famous old theater ourselves with some of the most talented people to ever tread the boards.

Most of the Festival year data default to 1990 but the videos date from approximately 1985 to 1995. There may be a few mis-identifications of groups but there were many hours of web searches to find them based on clues from the videos.

The Video Quality data column is used to note whether or not the text generator in the camera was accidentally left on. B=balcony, BT=balcony with text, S=stage, ST=stage with text, edited videos have the VHS/DVD quality because several DVDs were made from these mpeg2 files.
Collection Archived by Robert Whiteside, archivalproductions@gmail.com

Created on
May 27
2021
VideoBgood
Member
VIEWS